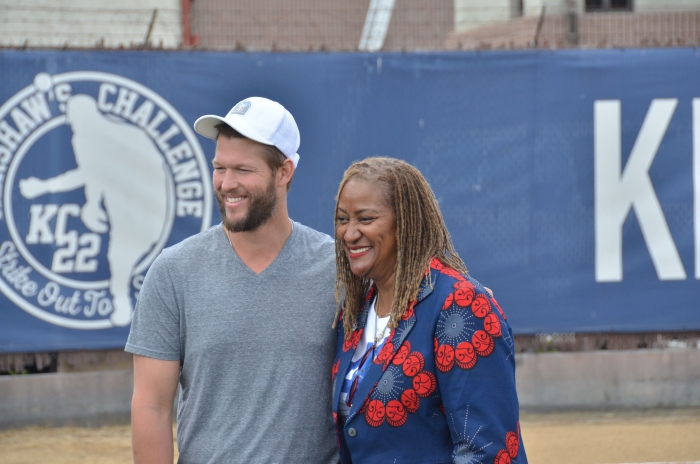 “Baseball was forever changed on that day and we are honored to be celebrating his achievements and contributions to baseball,” said Compton mayor Emma Sharif. “I among my colleagues on the city council past and present are extremely proud of these fields which kickoff the return of sports programs in the city since the pandemic hit.

Jackie Robinson’s wife Rachel, son David, and granddaughter Ayo along with pitcher Clayton Kershaw and his family were in attendance for the unveiling. Phase two upgrades include the solar power installation that will power the park’s lighting, EV car ports and upgrades to the field. 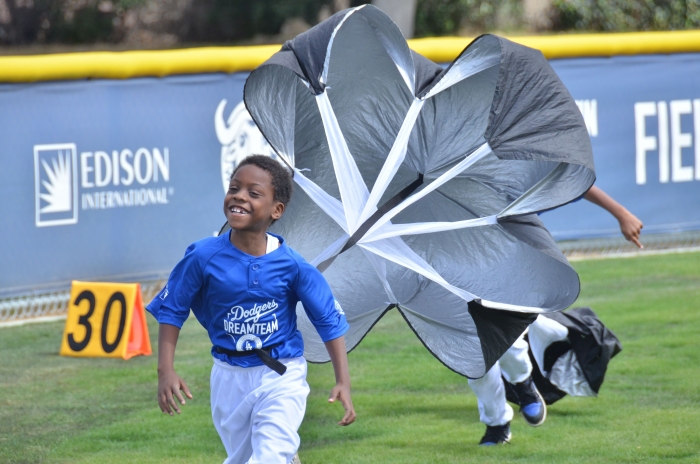 After the unveiling ceremony, the King/Drew Golden Eagles and Centennial Apaches baseball teams played in a celebratory game, nicknamed the “Jackie Robinson Classic” to honor the 75th anniversary of his historic breaking of the color barrier in Major League Baseball.

As the Jackie Robinson Classic was underway, the youth involved in the Dodgers DreamTeam development program (formerly known as Dodgers RBI) took part in a STEM Field Day to learn how baseball relates to science and math.

“This site at Gonzales Park is just an amazing facility with such an amazing impact that it will have on the community,” said LADF CEO Nichol Whiteman. “With some amazing partners like the City of Compton and Kershaw’s challenge and FivePoint and others, we’ve come together and spent the last two and a half years—even through a pandemic—bringing so many of the various components of this park together.” 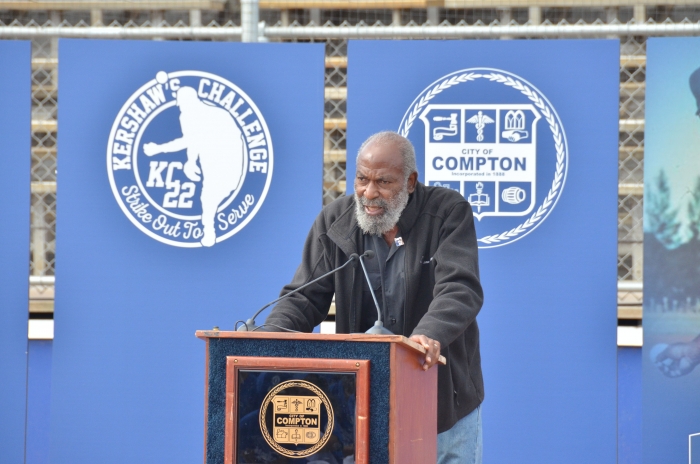 For David Robinson, the facilities are about the future and the continual progression from the state of the United States during the time his father competed in the Major Leagues.

“1947, before you were even thought of being born, baseball—and much of American society—was segregated by law, by tradition. We were kept apart as citizens,” he said. “The nation was divided and weaker and didn’t look anything as lovely as you kids out there today of all different colors and all different genders.”

This marked the first time that the Robinson and Kershaw families saw the Gonzales Park renovations in person. Kershaw was in awe of how well the Dreamfields looked like.

“We want y’all to have the opportunity to play this great game,” Kershaw said to the youth. “We want you to have fun with your friends and encourage your teammates and be great kiddos on the baseball field.” 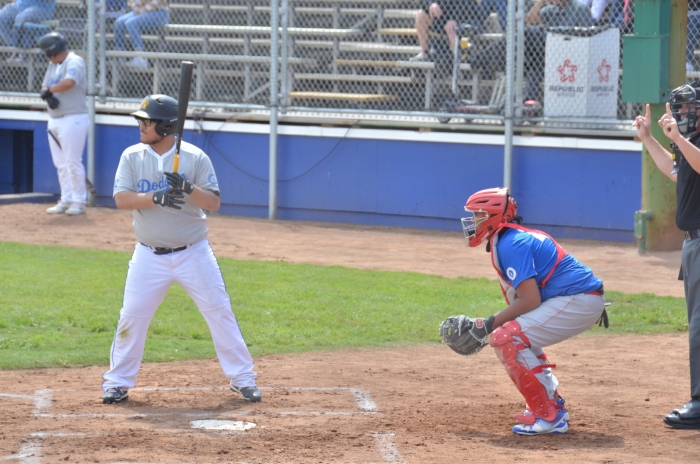 During the STEM Field Day, youth learned about reaction times, ball spin and the Magnus effect, and wind resistance. On the back of the stadium is the Science of Baseball outdoor classroom that shows the physics of launch angles and pitches, the science behind batter reaction times, charts on nutrition as well as other STEM facts. The wall also had a historical aspect, showing Jackie Robinson’s wingspan and broad jump measurements, the Dodgers’ retired jerseys and the club’s Commissioner’s Trophies.

“Our goal is STEM, so how do we expose them to different individuals that are working in STEM at the sports team as well,” Heaton said. “It’s about interactive opportunities to help kids make the connection that they can use the sport to help improve their academics.”

King/Drew is one of the contenders in the Coliseum league with a 12-3 overall record. They jumped to a 3-0 lead by the end of the first inning. 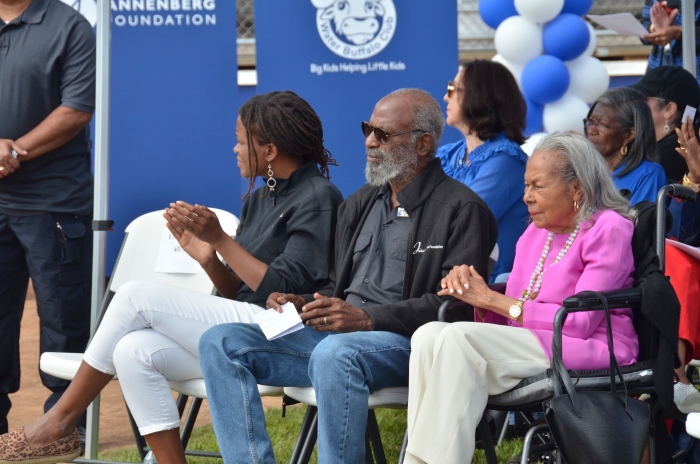 “We played on this field when it was not quite so nice and the back fields were not very good and you made due,” said King/Drew baseball head coach Ken Jaffe. “Finally, it’s renovated and it looks great.” 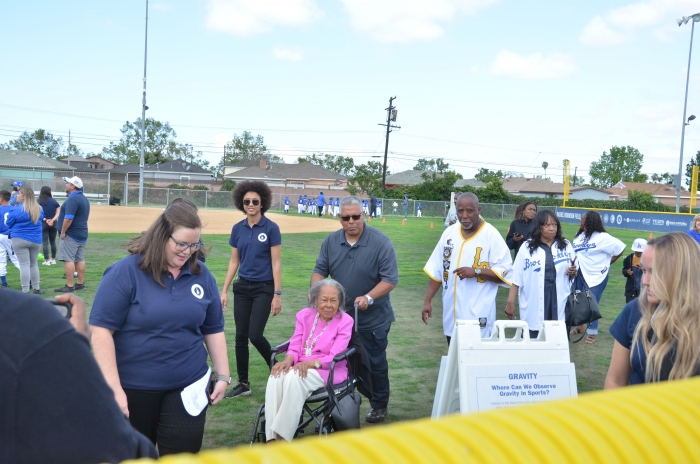 “We need to reach out. We need to go to some of the kids that are playing Pop Warner football, basketball even though they’re a well-organized league,” he said. “That’s where we need to go to get some of our African Americans to play on both sports because Jackie was an all-around athlete.”

Phase one of the renovations at Gonzales Park was completed in time for Jackie Robinson Day 2021, which included the upgrades of playing surfaces, scoreboards, and irrigation to all three fields. 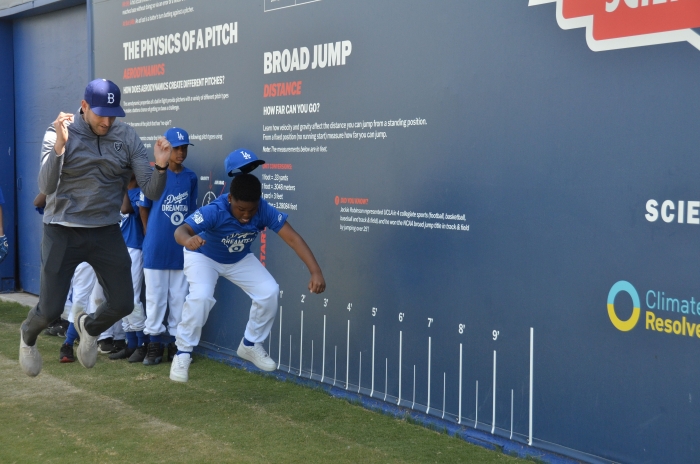 L.A. County Supervisor Holly Mitchell talked about how her father would take her to Dodger games in her youth and explain Jackie Robinson’s legacy to her.

“It gives me great pride to be a sitting member of the L.A. County Board of Supervisors and Chairwoman this year to see this project come to fruition,” she said. “I can’t wait to be able to come back and see games and see these parks, all of them come to life.”

On Saturday, May 1st, Science of Sport participated in the Know the Score virtual family […]

Meet the Science of Sport team

Got questions? Check out our FAQ

Who we are and why we do it